If you haven’t read it by now, Jamaica is racking up quite a bit of debt.  We, at diGJamaica.com, can’t tell you what the debt is being used to do specifically. The Government of Jamaica would need to tell us that.  But we can give you a general idea of where the money is coming from.

As at December 31, 2011 the Debt Management Unit of the Ministry of Finance reported US$8.6 Billion in External Debt owed by Jamaica to international lenders.  These lenders include Private Creditors, Multi-laterals and Bi-laterals.  Jamaica has been slowly reducing her debt to the international community since the end of 2011, and as at September 30, 2012, the External Debt now stands at just under US$8.2 Billion.  Let us look at the External Debt in totality: 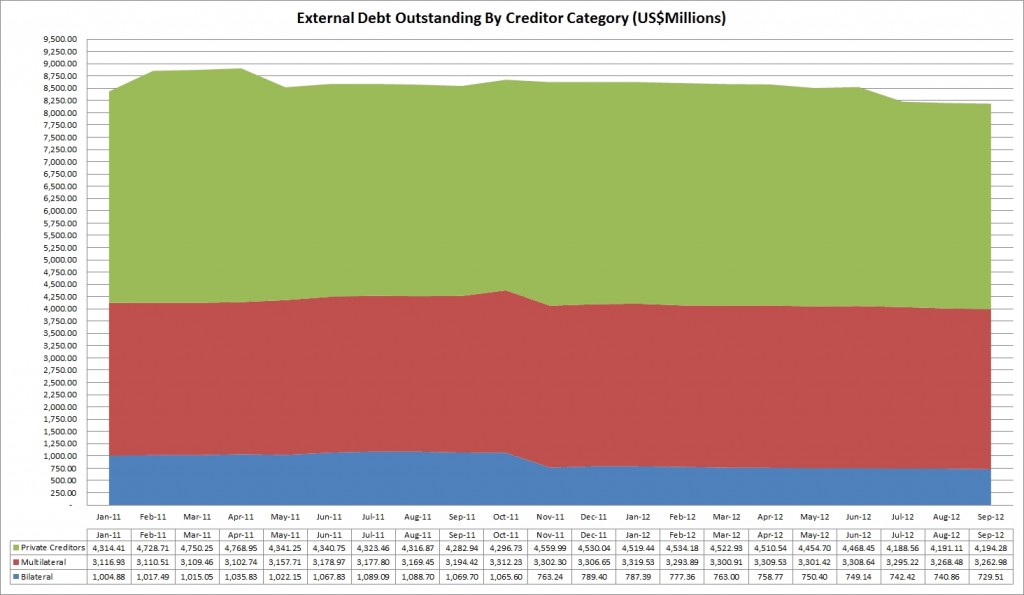 The graph shows us how slight the change is relative to the overall debt burden. However, this fall is quite significant.  It represents a drop of 5% or over US$439Mln.  With a stable exchange rate, such a change would have presented quite a different picture. Unfortunately, the Jamaican Dollar has depreciated relative to the US Dollar by 3.8% between January and the end of September, eliminating (in Jamaican dollar terms) much of the decrease in the External Debt.  When the depreciation of the Jamaican Dollar is factored in the 5% drop in External Debt in US$ terms, becomes a mere 1.4% drop in J$ terms.

The graph also shows us that Private Creditors are the largest category of lender.  This category includes commercial banks, but the majority comes from the issuance of international bonds. These bonds form the largest part of Jamaica’s External Debt.

The smallest category is Bi-Lateral Lenders. These include OECD and Non-OECD countries.  OECD countries include Australia, Israel, France, Germany, UK, USA and Japan and about 30 others.   The first thing one notices about the data set is the sharp drop in borrowing from Non-OECD countries in November 2011.  We do not yet know why this is so.

diGJamaica Research wants to know more about Jamaica’s economy and share what we diG up. What would YOU like to know?