Jamaican author, Melanie Schwapp, has crafted a story that confronts issues of race, colour and class in society and resonates with black women and girls at home and abroad. Her book, Dew Angels, was recently published by UK publisher, Hope Road Publishing, and is the winner of the Words on Wings Young Adult Fiction Prize.

Dew Angels is a novel about survival. Nola Chambers is rejected most of her life by those she should most trust. Born with dark skin into a family that prides themselves on their ‘light’ complexion, Nola grows up feeling abandoned and worthless. She stumbles through a lonely life, suffering abuse at her father’s hands and harsh judgment from society. Bolstered by memories of her grandfather and a surprising friendship with another outcast, Dahlia Daley, another world is opened for Nola. Through several dire events, Nola gradually discovers her self-worth. 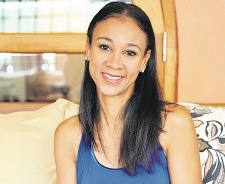 Melanie Schwapp was born in Kingston, Jamaica. Two short migrations at key stages of her life opened Melanie’s eyes to the cultural and social discriminations in society, and thus began her quest for understanding through writing. At the age of five she moved to England with her family, where she was awakened to the nature of colour prejudice, and then during her late teens and early twenties she attended the University of South Carolina, where the subtle traits of discrimination cemented her interest in the social repercussions of these prejudices.

Although Melanie has written recreationally all her life, her first published work was a children’s book, Lally-May’s Farm Suss in 2007 in which she revives a Jamaican myth and several cultural aspects through the eyes of a child.  Her second publication was the novel Dew Angels where she explores the hidden aspect of prejudice and other social handicaps in Jamaican society.

Having fallen in love with the rural lifestyle while growing up on her grandparents’ farm in Montego Bay, Melanie also does small garden landscaping and interior decorating. She is a mother to her three children. She resides in Kingston.

In her own words: ‘Why I Wrote Such A Book’

I figured out the world was not the warm, fuzzy place I’d thought it was when I was just five years old. It was such a sudden realization that it stopped me in my tracks and left my with my mouth gagging open. Literally.

When I was five, my family moved to the UK so my father could sit his FRCS London exams. My youngest brother was just a baby, and with no help at home, my mother gratefully accepted when our neighbour offered to have her children (who went to the same school) walk me to and from school. I had never walked anywhere on my own before, and with childish innocence, I accepted this great new adventure.

The first morning of school I felt like such a ‘big girl’, walking in the crisp English air, taking in the sights of colourful tulips and laden apple trees. Sounds beautiful, eh? It fit so perfectly into the fairy tale world I’d read about in my Enid Blyton books. I really did expect that a gnome would suddenly peek at me from beneath a toadstool.

Little did I know that when we walked into school that morning and my new friends dropped me off at my classroom door, they had been immediately surrounded by a mob of students who laughingly mocked them for being in the company of the ‘black golliwog’. By the end of the day, my neighbours had had enough of the teasing, and when I approached them for the walk back home, they tore through the school gates, leaving me there with my mouth open as they disappeared down the street. Now, maybe if I had known that morning that I would have been abandoned by my guides I would have paid more attention to my route instead of searching the bushes for gnomes. Alas, I had not the faintest clue how to get home. I turned to the parents walking by, begging them to call my mummy or to help me get home, but one after one, they just looked at me with disgust, grabbed their children and followed the route of my neighbours. In just a few minutes, my exciting adventure had become a nightmare, and my soft, beautiful world had become a cold, frightening place.

The happy ending to the story is that my neighbours were chased straight back to school by their mother and sullenly walked me home. I immediately understood when I saw my mother’s pained face why she had been so sad to leave Jamaica and to take on this ‘adventure’. We spent nearly two years in England, and in that time I grew to understand that look on my mother’s face more and more. I grew to know the world outside of those Enid Blyton books, where gnomes and fairies do not get along for the sheer reason of being different. Yes, I made friends in England, and faced my time there with that wonderful resilience that children have. However, my innocent view of the world was gone forever. Luckily, it was the seed I would need later on when I went to university in South Carolina and once again faced the ugly reality of racism and prejudice. That seed planted in the schoolyard had given rise to a little voice of self-preservation that became magnified in my adult years at college. I learned to speak up in the face of adversity, both towards my gender and my race.

When I became a mother, that incident in the schoolyard was once again placed in the forefront of my memory. I think that in seeing my beautiful children with that ‘in-love’ look at the world pained my heart. It pained me knowing that they would have their schoolyard incidents too, where their soft, perfect world would one day shatter before them.

I decided that I would use the thing that had saved me – my voice, my writing, to prepare my children as much as I could. I embarked upon writing books that celebrated Jamaica, where the protagonist looked like them, where they would not search the bushes for gnomes, but for Jamaican characters like Anansi, rolling calves and jonkanoo. It was important to me to give them a base built on national and self-pride that would anchor them during the storms of rejection. Thus, Lally-May was born.

In the children’s book, “Lally-May’s Farm Suss”, Lally-May is a strong-willed, curious child who has deep family bonds and who celebrates Jamaica’s country life and the honourable living from farming and agriculture.

As my children got older and began to face their challenges, I saw the need for even deeper lessons. Nola Chambers was then born. With her black skin, scarred face and soft love of this harsh world, Nola grew even beyond my pen. She absorbed every experience, every rejection, every joy, every sorrow that had ever crossed my sphere of existence, and exploded into a character that actually directed the course of the novel. “Dew Angels” became more than just a lesson for my children. The book morphed into a study of Jamaica’s paradoxical psyche. You see, within my sensitivity towards racism, my eyes opened to the reality that it existed right there in my own country. In a country built on a history of cultural blending, differing factions were ripping Jamaica apart, and Nola became that mirror.

So, in answer to the questions, “Why did you choose to write about such a harsh topic?” and “Do racism and that level of child abuse really exist in Jamaica?”, let me just tell you what I tell my children – we cannot overcome an obstacle if we don’t see it. If we are blind to it, it only makes us stumble and fall.  I hoped for “Dew Angels” to not just reveal that wall, but to also show the ladders of resilience and self-acceptance that enable us to get over it.

The words of Sara Bareilles’ song, ‘Brave’ have become amongst my favourite lyrics. They encompass so much of what I’ve tried to teach my children – “Say what you wanna say and let the words fall out….honestly, I wanna see you be brave.” Truth is, sometimes all we can do is be brave. As for me, I believe that sometimes in order to right the wrong, we must write the wrong.

Do you have any Jamaican authors that you would like to see featured on diGJamaica? Email us with feedback and suggestions at dig@digjamaica.com, or leave us a comment. Happy diGging.

Come for the Literature, Stay for the Music