In real terms, each man, woman and child, through the Jamaican government, owed a little more than J$460,000 to foreign debtors.

To Whom Do We Owe This Debt?

We owe a lot of different entities money, but by far and away the largest owners of Jamaican Government debt are Private Bondholders – nearly 61%! Bonds are Jamaica’s largest source of international debt financing. This is why it is important to hear what ratings agencies like Standard & Poors and Moody’s think about us when they assign us a bond rating – it affects how we borrow money going into the future. The lower your bond rating, the more likely the rating agencies believe you won’t pay them back their bond in the future. Ratings have been moving upward over time as our economic situation has improved. 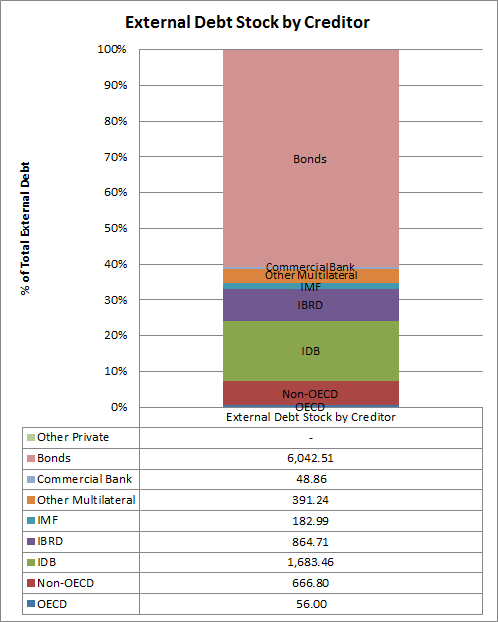 Our next largest set of lenders are the multilaterals – the Inter-American Development Bank, the International Monetary Fund, the International Bank for Reconstruction and Development, the Caribbean Development Bank and others, owning more than 31% of Jamaica’s debt. These loans are usually tied to particular projects, such as rural electrification, the education system transformation programme or the fiscal administration modernisation programme.

The third and smallest tranche comes from bilateral lenders, such as China, the US and the UK. In recent years China has been our largest bilateral lender, while in previous years we have owed and repaid countries such as Germany and Kuwait.

What Are The Interest Rates On These Loans?

Right now, the Government does not give us precise information. However, we do know that the majority of these loans are fixed interest rate. In a low interest rate environment, this is probably a good thing.

What Currency Do We Have To Pay The Loans Back In?

Although we borrow from all over the world, nearly everyone wants to be repaid in US$. 98% of all our loans are to be repaid in the greenback, and this is why the US$ will remain the most important currency in the world for years to come. 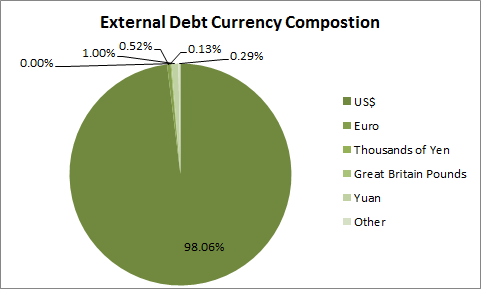 When Are Our Loans Due?

And now for the most important question, especially relating to this year’s budget – when are our loans due for repayment? 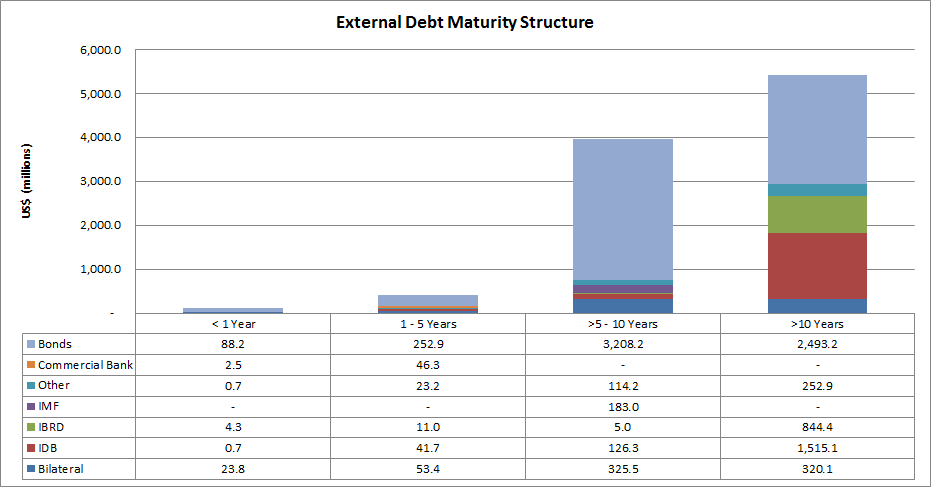 The graph above shows that over the next year, US$120mln of loans become due. Thereafter, for the next five years an average of US$85.7mln/year in loans becomes due each year – how that is distributed annually we don’t know. But that is very good news for the next government.

The five year after that though, over US$792mln/year in loans becomes due annually! Fortunately, this is mostly in bonds, so more than likely new bonds will be issued to retire those old bonds. We can only hope that the world will still be in a low interest rate environment 10 years from now.

54% of our debts, as shown here, are not the current government’s problem – they are the problem of the next generation of leaders.

Tomorrow we will look at domestic debt and hope it is not nearly as exciting as this.