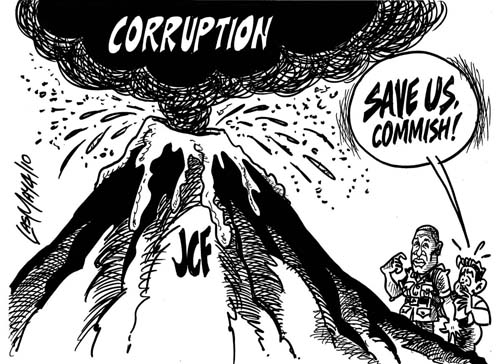 If you ask Jamaicans to name the one thing preventing the country from actualising its potential, the answer you are most likely to receive is ‘corruption.’ It is rampant at just about every level and in every sphere of society, from the politicians to the police to those in business. Naturally – and unfortunately, the people who suffer the most as a result of corruption are those who can least afford it.

Therefore, it should come as no surprise that Transparency International’s 2012 Global Corruption Perception Index (CPI) has ranked Jamaica 83 out of 176 countries. Maintaining a score of 3.3, Jamaica is basically in the same position it has been since 2010. In 2011, the country ranked 86 out of 182 countries and was ranked 87 out of 178 countries the year before. In 10 years, Jamaica has never scored higher than 4.0 on the CPI, which ranks countries according to their perceived levels of public sector corruption. A country’s score indicates the perceived level of public sector corruption on a scale of 0-100, where 0 means that a country is perceived as highly corrupt and 100 means it is perceived as very clean. Jamaica’s corruption perception is at 38, which means it is very corrupt.

Such a high level of corruption, real or perceived, does not bode well for Jamaica’s development. According to the National Security Policy, “… corruption in its various forms is a serious threat to the social order and the rule of law … inhibits the ability of the State to effectively discharge its responsibilities and obligations … political institutions and freedoms can also be affected by corruption … through the corruption of public officials … through rewards but may also be coerced through direct threats.” The existence of such rampant corruption has attracted much negative international attention, which could have serious implications for foreign direct investments (FDI), which are necessary to help create jobs and boost the ailing economy. Additionally, the Global Competitiveness Report 2012/13 identifies ‘corruption’ as number three of the 16 “most problematic factors for doing business in Jamaica” – ahead of ‘tax rates’, ‘inefficient Government bureaucracy’ and even ‘tax regulations.’

Earlier this year, Professor Trevor Munroe, in a contributed article, raised some of the same points, citing three major examples of corruption in Jamaica, which have all attracted significant international media attention: 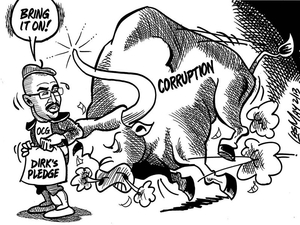 We will add one more example, the recent case with state minister Richard Azan, who was chided by Contractor General Dirk Harrison for being politically corrupt after instructing a private contractor to construct 10 shops at the market last September without the permission of the Clarendon Parish Council. Admittedly, this is pretty ‘mild’ when compared to the others, but a little leaven leaveneth the whole lump. Azan basically received a slap on the wrist and was, in fact, reinstated. At the same time, Minister of Science, Technology, Energy and Mining Phillip Paulwell was also chided for improper intervention into the tender process for the construction of the 360-megawatt power plant and the acceptance of one of the bidders after the deadline that had been set. His response? “I am fighting for Jamaica’s very future, and I will not be derailed from my objective.”

How can the country be expected to progress when situations like these appear to be the rule, rather than the exception? How can the rule of law be upheld when the average citizen does not trust the police, when political tribalism remains rampant and encourages criminality? Until those with the power to do so make a concerted effort to stamp out corruption in their parties and organisations, the best efforts of the ‘little man’ will fail to yield fruit and the most elaborate economic development plans will amount to naught.

Munroe, who is the executive director, National Integrity Action, a not-for-profit company formed with the objective of combatting corruption, posits a number of solutions. These include building public awareness of how corruption negatively impacts Jamaica; plugging the necessary legislative and institutional loopholes; and renewing and strengthening a national programme that will promote a culture of honesty, integrity and hard work while combatting negative values. These and other solutions put forward over the years do look good on paper, but they must be appropriately funded and supported to be effective. Look at the current situation, where the Office of the Director of Public Prosecution has failed to provide rulings in 14 of the 18 cases referred to it by the Commission for the Prevention of Corruption, recently formed to reduce corruption in the public sector. The problem is that the Office of the DPP is not properly staffed to handle this increase case load. The DPP has called for the services of an additional 10 to 15 lawyers to boost the complement of 43 Crown counsels.

The government has to put its resources – financial and human – where its mouth is and stop paying lip service to stamping out corruption, or making half-hearted attempts. Otherwise, we will continue to stagnate not only in the CPI rankings, but economically and socially.