Champs 2015 kicks off tomorrow, March 24. For this Champs week, we’ll be doing a ‘Then & Now’ feature on the blog, where we look at a star from the past and a current star-on-the-rise from the same school. We start off with two Holmwood Technical High queens. 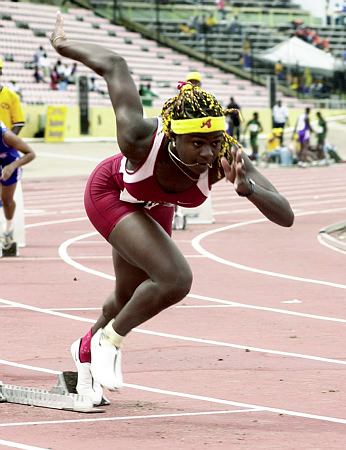 McLaughlin first appeared at Champs in 2000, originally a 100m and 200m sprinter. However, she moved up to the 400m and in her debut season, set her first record – 53.77 seconds, the first sub-54 seconds clocking by a class 3 athlete in Champs history. The next year, still in class 3, she ran 52.52 seconds, faster than the class time for the girls’ 400m time set by teammate Sheryl Morgan.

Her stellar Girls’ Champs career is littered with 19 gold medals across all classes, and she was the linchpin of Holmwood’s unrelenting hold on the trophy from 2003 to 2005, and her legacy undoubtedly inspired the team to keep going as they recorded a 10-year winning streak. Unfortunately, McLaughlin hit a rough patch in 2004. Her times – 23.19 and 53.06 seconds – were not improving and she became injury prone. She kept her class 1 400m crown, but was whipped by Vere’s Simone Facey in the 200m. In her final Champs season, she switched back to the 100m/200m double and won the hundred over Shelly-Ann Fraser, won the 200m in 23.40 seconds and helped Holmwood to the 4x100m and 4x400m titles, the latter being their third in a row.

McLaughlin has found the going even rougher post Champs, as her injury and weight woes continued as she went overseas. She returned to Jamaica, studying at the University of Technology, where she still trains with the MVP camp. She finished sixth in the 2009 World Championships 200m final. Her best performance since then has been helping the Jamaican 4x400m team to a silver medal in the World Indoor Championships in Sopot, Poland in 2014. She is currently on a break for this year’s track season.

Holmwood’s golden years seem to have faded, as longtime rivals Edwin Allen has won two of the last three duels at the top of the Girl’s Champs table. The ladies in blue are expected to dominate again this year as the Holmwood team seeks to rebuild. The name on everyone’s lips to help lead the regeneration is Lisa Buchanan, the class _ 800m and 1500m specialist.

Buchanan’s first headline-grabbing Champs moment came in 2013 when she slowed and waited on her teammate Shanieke Watson in the class 2 1500m final, aiming to create history and share the gold. The altruistic move cost her the gold medal as she was clocked at 4:43.93 minutes to Watson’s 4:43.92. She didn’t seem to mind, as Holmwood won Champs in the end.

Buchanan is no stranger to the top of the podium, as she claimed the class 3 800m title in 2011. The Buchanan/Watson duo are expected to help power the Holmwood team with experience and speed.