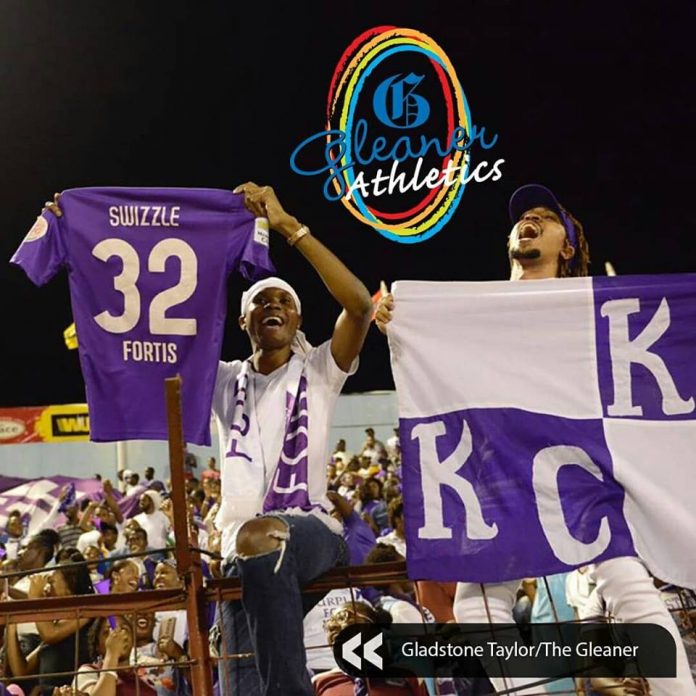 “It has been 10 years since a Kingston College’s (KC) hand last touched the Mortimer Geddes trophy, but after another day of metronomic efficiency at the ISSA/GraceKennedy Boys and Girls’ Athletics Championships yesterday, purple hearts are getting ready to exhale…” Read more: Sprint To The Finish! – KC, Edwin Allen On Track For Champs Glory

“The many-time champions started the day with an eight-point lead over arch rivals Calabar High, but when the 400m hurdles came around in the afternoon session, things took a drastic change…” Read more: Purples Reign On Day 4 – KC Lead Defending Champions Calabar By 40 Points

“Tina, who had been looking at her sister’s back all season over the 100m, stopped the clock at 11.27 seconds to break Shauna Helps’ seven-year -old mark of 11.50 seconds. No other 14-year-old girl in the world has ever gone faster. You would think she would be thrilled with her achievement, but…” Read more: ‘I Wanted My Sister To Win’ – Tina Clayton Ambivalent After Impressive Win, As Davis, Moore And Distin Delight At Champs

“[Briana] Williams, who has a personal best time of 11.13 seconds in the 100m and 22.50 in the 200m, told The Gleaner in an interview that she plans to go much faster this season.“My expectations are…” Read more: I Wish I Competed At Champs – Williams

“It has been five years since Holmwood Technical last won the girls’ title at the ISSA/GraceKennedy Boys and Girls’ Athletics Championship, and the wait has made the school as hungry as it was for its first title..” Read more: Holmwood Will Be Back – Jones

“Calabar has an established reputation in the throws events as it is the alma mater of Smikle and also Fedrick Dacres, Commonwealth Games Champion, last year’s IAAF Diamond League winner, and the 2018 RJRGLEANER Sports Foundation Sportsman of the Year. Those are large footsteps to follow, but [Kai] Chang is…” Read more: Chang Continues Calabar Legacy

“Courtney Lawrence is the latest in a growing line of fine throwers from Petersfield High School and could join the likes of Daniel Cope, Sanjay Lawrence, and Kevin Nedrick, as an ISSA/GraceKennedy Boys and Girls’ Athletics Championship winner today. Lawrence qualified easily for the Class One shot put final and has set the stage for glory…” Read more: Will Nedrick’s Record Go?