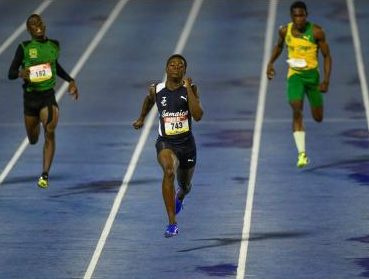 “Edwin Allen’s Rushana Dwyer registered the fastest time in the Class Two girls 800m with 2:16.73. The Class Three ­champion from last year is looking to upset Holmwood’s Daniella Deer, the silver medallist from last year. Deer finished second in her semi-final with 2:17.83 behind Spalding’s Cheriece Cope, who stopped the clock at …” Read more: Edwin Allen Make Their Move

“He has continued that impressive showing at Champs, leading all qualifiers into the 100m semi-finals after winning his heat yesterday in a time of 10.32 seconds to underline his status as a favourite for the gold medal. Seville, who came to Calabar with a personal best of…” Read more: Sizzling Seville – Calabar New Boy Hopes For Special Performance

“St Hilda’s High School won the inaugural staging of the ISSA Girls’ Championships in 1957, but the girls from Brown’s Town, St Ann, have not been able to stamp their authority on the event since…” Read more: St Hilda’s Looking To Reclaim Champs Glory

“Petersfield head coach Machel Woolery has been telling the tale that the outstanding Antonio Watson has been hearing footsteps in practice. Back at full speed after an early-season niggle, Watson is back to the form that has won him titles at home, at the ISSA/GraceKennedy Boys’ Championships, and abroad. However, according to Woolery, he has been hearing the footsteps of teammate Kevon Stone in training recently…” Read more: Woolery Excited About Petersfield Pair

“Edith Dalton James High athlete Sanoya Douglas is still basking in the experience of competing at the ISSA/GraceKennedy Boys and Girls’ Athletics Championships at the National Stadium yesterday. The 13-year-old Douglas, who is the only female athlete to represent the school at the championships…” Read more: Edith Dalton’s Douglas Looking To Grow From Champs Experience