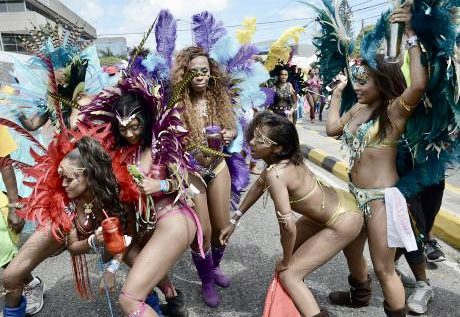 If you’re not familiar with Caribbean culture, it can be confusing seeing persons walking around in shimmering tights or fishnet stockings, with feathers strapped to their backs, as music blares from every direction. If you’ve found yourself in this situation, chances are, you’re in the middle of a carnival.

Carnival is a multimillion-dollar festival in the Caribbean, which attracts persons from every corner of the globe, to take part in a cultural celebration of music, dance and national pride.

In the Caribbean, the idea of carnival: which closely mirrors what we know today, began as a celebration amongst the enslaved Africans. While the European settlers held their own balls and celebrations (from which the Africans were excluded), slaves created their own means of celebrations, which included various cultural rituals, music and dances. The rapid growth of Carnival spread across Eastern Caribbean islands such as Trinidad, as a celebration of the end of slavery.

In Jamaica, Carnival began at the University of the West Indies Mona campus in the 1950s, as local students – having been influenced by their Eastern Caribbean classmates – engaged in the festivities. This engagement became known as the “UWI Carnival”, an annual event which still exists today. Carnival, however, was not seriously established on the island, until Byron Lee, a Jamaican musician, decided to establish it as a formal event in 1990. Since then, it has continued to grow exponentially.

Carnival in Jamaica has become a huge annual celebration that sees numerous artists and tourists travelling from across the Caribbean and elsewhere to take part.  Carefully timed, the events are orchestrated in such a way that they do not conflict with Trinidad’s carnival celebrations, which take place before Ash Wednesday. Though its development in Jamaica is fairly recent, Carnival continues to grow, and has gradually become an important part of Jamaican culture.