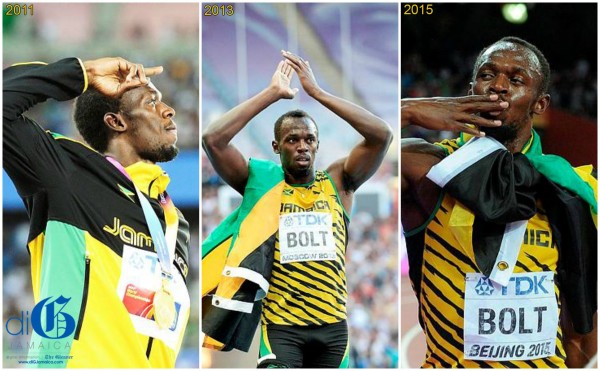 No one could have predicted it. Or, rather, no one would have even dared. For to suggest that Usain Bolt—sprint king, legend, god amongst men—would fail to defend his 100m crown in his last individual race on the international stage would have been viewed by track fans around the world as some form of blasphemy. But that is exactly what happened on Saturday evening as the big man laboured to the finish line after a terrible start behind long-time rival and villain of the story, Justin Gatlin, and the new kid on the block who might just be his heir apparent, Christian Coleman. The venerable Usain Bolt, previously impervious to defeat, had ended his individual career not with a bang, but a bronze.

And we were hurt. And disappointed. And hate rained down from many upon Gatlin’s head. And some wondered whether Bolt did himself and his legacy a disservice by not ending his career after his triple gold finish at the Rio Olympics last year. After all, isn’t it best to go out as a champion, with your name still at the top? Sure, it would have been nice to see him win and crown himself in golden glory one last time, for the culture. But can a ‘mere’ bronze medal tarnish the legacy Bolt has built since he was 15 years old? Absolutely not.

Let’s take a little trip down memory lane, shall we, to see how the legend of Usain St Leo Bolt of Sherwood Content, Trelawny, came to be.

Over the course of his junior years, he racked up victory after victory, record after record at our own Boys and Girls Champs, the CARIFTA Games, and more. In fact, he became the first junior to run the 200m under 20 seconds—19.93—at the 2004 CARIFTA Games held in Hamilton, Bermuda. He still holds that (world under-20) record today, as well as the the world under-18 record for the 200m—20.13 seconds, set at the Pan-American Junior Championships held in Bridgetown, Barbados in July 2003. How’s that for legendary?

Bolt’s transition to the senior ranks came at the 2005 World Championships in Helsinki, Finland. At 18 years, 355 days old, he became the youngest ever finalist for the men’s 200m. But it was not the debut he would have wanted, as he pulled a muscle and finished last. The winner? Justin Gatlin. Poetic, no? Two years later, Bolt made good on the promise of his junior days when he took silver behind Tyson Gay in the same event. Those two events, plus last week’s 100m final, mark the only three times he has ever been bested in a solo international final. Ever. How’s that for legendary?

And we all know how the story played out from May 2008 onwards, when his lanky 6’5” frame first rearranged the laws of physics and sprinting to break the 100m world record at the the Reebok Grand Prix in New York, USA. Almost three months later, he would do it again at the Beijing Olympics, this time while coasting and beating his chest, his shoelaces untied. He was more reserved in the 200m final, his pet event, and again, rewrote history. He is the only sprinter to win the triple double—100m and 200m titles—at three consecutive Olympics (2008, 2012 and 2016), and certainly the first to ‘triple triple,’ but for the unfortunate loss of the 2008 relay gold due to teammate Nesta Carter’s retroactive disqualification for a doping offence. How’s that for legendary?

Overall, Bolt has amassed 29 international medals over the course of a stellar 15-year career. Twenty-three of those medals are gold, five silver, and one bronze. He has 14 senior World Champs medals, 11 of them gold, making him the most successful athlete in World Champs history—also the first to win the triple double at the competition. He is one of only nine athletes to win world championship titles at the youth, junior, and senior level of an athletic event. How could anyone even worry about his legacy?

Above and beyond all of these accomplishments, though, is the spirit in which they were achieved. Many before him were fast, and set world records, but none of them did what Bolt has done. He brought joy and levity to an arena that was previously stoic and stiff, his personality lighting up the stadiums and beaming through to our television, computer and phone screens. For almost a decade, he carried the sport of athletics on his shoulders, battered and bruised as it remains from decades of doping scandals.

Even after some other young men come along and replace him as the fastest, that megawatt personality, the dancing, the fist bumps with volunteers, the showmanship, just cannot be duplicated. And let’s not forget his sportsmanship. His lightheartedness replaced the era of big egos and trash talk, and you can see the high esteem in which he is held by even his fiercest rivals. Just look at Gatlin’s actions after he won on Saturday, and the flood of congratulatory tweets and social media posts from sportsmen and women and even statesmen from around the world.

Surely he was disappointed by the result, but Bolt has accepted his bronze medal like it was gold, with grace and humility. Those are qualities that cannot be manufactured by any PR machine. Those are characteristics of someone who was raised with quintessential Jamaican broughtupsy.

Usain St Leo Bolt has single-handedly made athletics great again, and that was a feat that required so much more than mind-bending speed. He is hanging up his spikes at just the right time. And we can only hope that there is one more medal to come when the 4x100m relays are run. We hope it’s gold, as he deserves, but whatever the result, nothing—absolutely nothing, can take the shine off of what he has created over the past 15 years. Usain, sir, you said in 2008 that you wanted to become a legend. Well, mission accomplished.