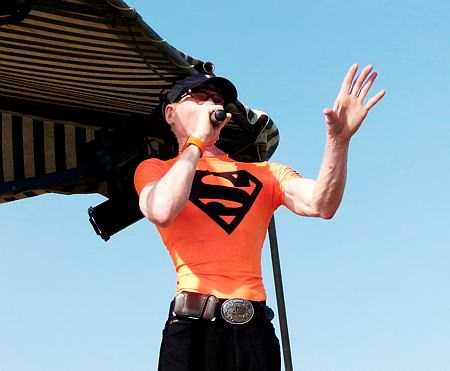 In 1981, Yellowman made history when he signed to Columbia Records, the first dancehall artist to ink a deal with a major US label. His contemporaries included Michigan and Smiley, Lone Ranger, Josey Wales, Charlie Chaplin, General Echo. A decade later, other American record companies began recognising dancehall and snapping up deejays, and the pounding Jamaican beats began to invade the Billboard charts, through Shabba Ranks, Patra, Mad Cobra, Chaka Demus and Super Cat. Other performers who came to prominence in the late 1980s and early 1990s were Ninja Man, Papa San, Lt Stitchie, Beenie Man, Bounty Killer, Buju Banton, Lady G and Lady Saw. That momentum has continued into the 21st century, mainly through the deejays. Shaggy and Sean Paul’s Hot Shots and Dutty Rock are two of the best-selling albums of the last 15 years, while Junior Gong’s Welcome to Jamrock is one of the decade’s most powerful statements.

Today, the flagbearers of the genre include Vybz Kartel and his Gaza crew, Mavado, Agent Sasco (Assassin), Konshens, Alkaline, Spice and Tifa.

Also, what would dancehall music be without actual dancing? The genre has spawned a number of dance moves over the years, with several hit songs directly related. Among the most popular are ‘Bogle,’ named for the dancer who created it and a number of other styles in the 1990s, the late Gerald Levy; ‘world dance,’ ‘butterfly,’ ‘summer bounce,’ ‘Willy bounce,’ ‘gully creeper,’ ‘nuh linga,’ ‘signal the plane,’ ‘pon di river, pon di bank’ and the controversial ‘dutty wine‘ and ‘daggering.’ Elephant Man is well known for bring the fun back into dancehall with a number of these songs and dance moves.

Speaking of controversy, the genre has been facing criticism since its early days. Much of the censure has to do with its lyrical content, which ranges from songs about women and sex and guns and violence on one end, to conscious, uplifting message on the other. Yellowman had a number of ‘slack’ hits in his heyday, and the trend continues today with artistes like Vybz Kartel, Spice and Alkaline. The ‘badman’ culture is also a continuum, as the likes of Super Cat, Ninja Man and Shabba Ranks have given way to Kartel, Mavado, and others.