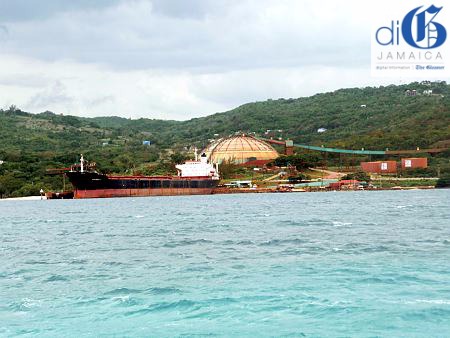 Few people now recall that Jamaica’s bauxite/alumina industry was launched in the hills just north of Ocho Rios and that it was this that started the metamorphosis of the tiny fishing village. At Phoenix Park near Moneague, the genesis of the bauxite industry is commemorated by a roadside plaque made from the first aluminum cast from Jamaican ore. The story goes that the alumina content of St Ann’s ‘red dirt’ was discovered when the original owner, Sir Alfred d’Costa, became distressed with the poor condition of his cattle and sent abroad samples of the soil for analysis and the high bauxite content was revealed. Thus, according to the plaque, “giving to Jamaica a new industry and to the countries of the free world a new resource against aggression a reference, perhaps to the extensive use of aluminium in fighter planes and missiles.”

Jamaican bauxite was not used during the war but three North American companies Alcan, Reynolds and Kaiser ­ came to Jamaica to survey, acquire reserve lands and set up operations over the next few years. The pier at the west of town is the only reminder of Reynolds Jamaica Mines, which was once the economic base of Ocho Rios. Construction of their deep water pier began in the late ’40s and the first shipment of Jamaican bauxite to be exported left there on June 5, 1952. This shipment was made to Reynolds’ parent company’s alumina plant at Hurricane Creek, Arkansas. The Reynolds mines, plant and office were situated in the hills south of Ocho Rios. The ore was mined in open pits, dried and then transported to the coast by an overhead conveyor belt 6.3 miles long.

By law, mined out bauxite land must be restored. In the process, the open pits left after mining are bulldozed, filled, graded and covered with at least 6 inches of the top soil scraped off when mining started.