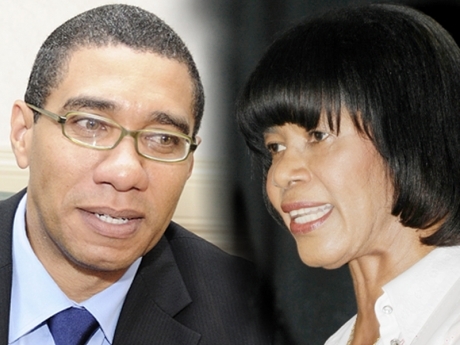 In today’s Monday Musings, we take a look ‘behind the news’ following yesterday’s re-election of Andrew Holness as the leader of the opposition Jamaica Labour Party (JLP).

Jamaica is known for fiercely contested general parliamentary elections every five years, dating back to 1944. Of the 16 elections, the JLP has won on seven occasions – including the 1983 polls, which the People’s National Party (PNP) boycotted. Read more on the history of Jamaican elections here.

The parties have only had seven leaders between them. The ruling PNP was founded and led by Norman Washington Manley in 1938 and is the oldest political party in the English-speaking Caribbean. Manley was succeeded by his son Michael in 1969, after he turned back the challenge of Vivian Blake. The younger Manley was succeeded by PJ Patterson, who beat Portia Simpson Miller  in 1992. Simpson Miller would ascend to the leadership of the party in 2006 in a highly publicised, heated internal election, where she defeated Drs Peter Phillips, Karl Blythe and Omar Davies.

On the other side of the aisle, the JLP was founded by Sir Alexander Bustamante on July 8, 1943. He was the undisputed leader of the party until 1974, when he was succeeded by Edward Seaga, who beat Wilton Hill in a bitter power struggle that threatened to divide the party. It is interesting to note that during this 31-year period, Bustamante remained the party leader even though two other men from the party – Donald Sangster (1965 to 1967) and Hugh Shearer (1967 to 1974)  were elected Prime Ministers of Jamaica. He eventually turned over the mantle to Edward Seaga in 1974, who led the party until 2005 – also 31 years. Bruce Golding, a former Seaga protege, was the successor. When Golding stepped down in 2011, he hand-picked Andrew Holness as the new party leader and Prime Minister. Read more about the party’s leadership races here.

There have been few direct leadership contests in either party. Besides the recent Shaw versus Holness match-up, the JLP has seen only one other challenge to an incumbent party leader: Mike Henry’s failed challenge to Seaga in 1978. On the other hand, the PNP has one such leadership challenge of note: in 2008, Phillips mounted a challenge to Simpson Miller’s leadership and was trounced.

Holness will now try to return a spirit of unity to his party, even as the defeated Shaw and several of his top supporters – Gregory Mair, Christopher Tufton, Ed Bartlett, Delroy Chuck, Marissa Dalrymple-Philibert and Daryl Vaz – have resigned in the wake of the results. Each has cited the reason for stepping down as a means of giving Holness “a free hand to select a team in which he has confidence going forward.”

Indeed, if the JLP is to offer itself to the Jamaican public as a viable alternative to the PNP come the next general election in 2015, it has to present a united front. It is interesting to note that Holness now finds himself in a position Simpson Miller is already familiar with: she lost the 2007 general elections in the first bid for her own mandate, but won in 2011. Time will tell if ‘lightning strikes twice,’ so to speak.