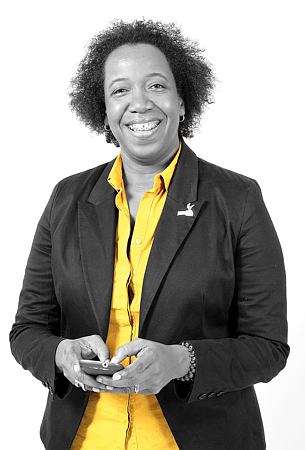 Ingrid Riley is a Jill of many trades within the Jamaican and Caribbean digital space. She is a tech pioneer – entrepreneur, digital strategist, researcher, event planner, mentor and more, helping to guide others as they start or continue their journeys in this fast-moving, ever-changing industry. For her dedication, she was selected as one of the Gleaner/PSOJ 50 Under Fifty awardees in 2012, which celebrated young business leaders who will help Jamaica achieve its Vision 2030 goals.

To close out National Science and Technology Month, we caught up with Riley to find out more about her story, from working in those early pre-broadband days, to her thoughts on the current tech landscape locally and more. diG in!

How did you get started as an entrepreneur in the local technology industry?

It started with my first startup, Maverick Media, and us publishing Jamaica and the Caribbean’s first Internet guide called iGuide Jamaica. I was just getting into being online and exploring, even with slow internet access. This was the late 90s, the days of ICQ, 28k dialup internet speeds and Colis bulletin boards and I was wondering how much of Jamaica was online and had websites and what Jamaicans were doing online, the trends, who were the people doing some cool things. I couldn’t find a central place, so I decided to create one.

I took the idea of my sistren Susan LeeQuee, a graphic designer, and having both come from a media and publishing background ( we met when I was a reporter and she was a designer at the Jamaica Observer), we started one. So I got started first as a publisher of an Internet guide, it won a Press Association of Jamaica Innovation Award, too.

I then moved on to co-founding a web development and online marketing company called Dutchpot Interactive. We were the first women-led development agency in Jamaica and the Caribbean and we had clients like JMMB and Digicel and had a team of five people, great office space and the whole nine yards. Those were fun, amazing and challenging years.

What were some of the lessons you learned from those early days?

Kingston BETA is one of your best known events. Why was it important for you to develop this platform for the local tech community?

Kingston BETA came out of a selfish need, then expanded into something greater – a mission – as we realised that a bunch of people had that same need to meet like minds who were playing, creating and launching initiatives and business in this online and technology space.

We wanted to meet each other, learn from each other and be a part of a community. I didn’t know that launching Kingston BETA in January 2007 would be credited and awarded for kick-starting Jamaica’s tech startup movement and community, and being instrumental in growing our tech startup ecosystem here. Now, we’ve done over 60 events, over 7,000 people have attended and over 200 aspiring and current tech entrepreneurs have pitched their ideas there. New businesses have formed, people have met their co-founders there, have been inspired to start their own tech-related businesses. We are the first and longest running tech community meet-up and pitch event in the Caribbean.

I’m glad we chose to do this. We started and funded this from when Susan and I had Dutchpot Interactive. That was our first event, and then I took it and with the support of some of my fellow entrepreneurs like Sandor Panton, Jamie Ranston and Chad Cunningham, I continued it and the community just keeps growing. It’s a standard now and I’m thankful for that, our tech startup community is growing, thanks to what everyone contributes to it.

What Is Business Intelligence?