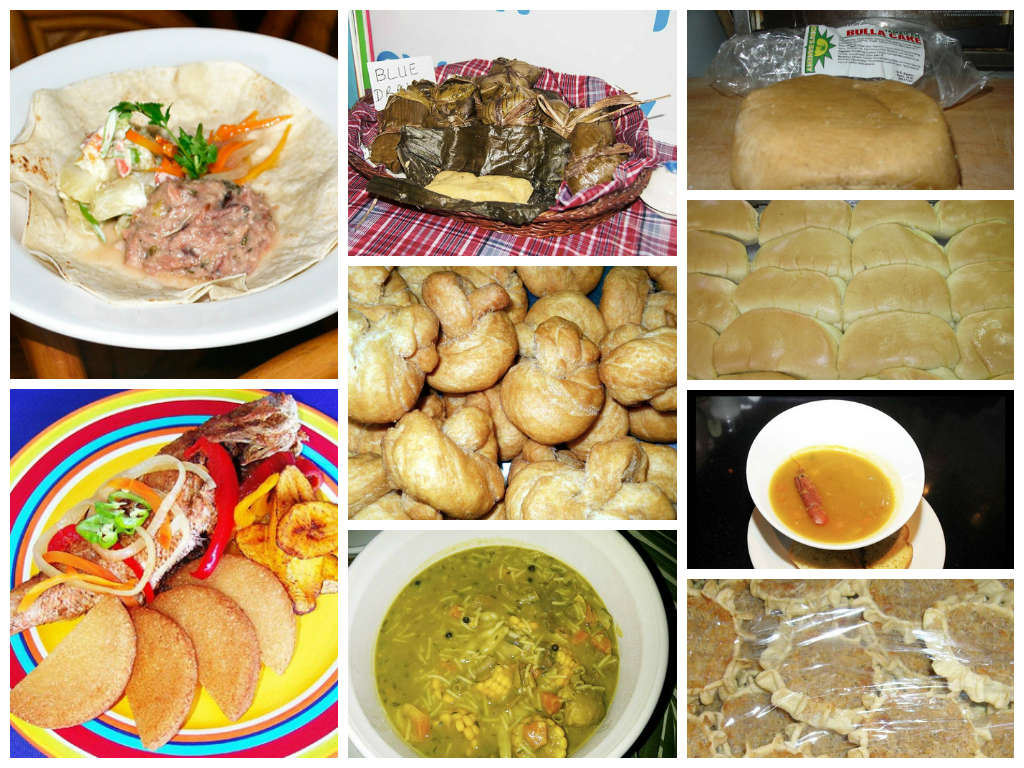 Jamaican food is delicious, but there’s no going around it – some of the names are kind of… weird. Think about it: are there gizzards in ‘gizzada?’ What does a sweet have to do with Sir Alexander Bustamante’s back? And there is no blue or underwear involved in making ‘blue drawers,’ is there?

As we continue our Food Month Pot-pourri, we look at nine popular foods with interesting names. Some recipes included.

This is traditionally a small, flat round cake made with flour, molasses or dark sugar, baking soda and spices, sometimes flavoured with ginger or banana. According to the National Library of Jamaica (NLJ), the inexpensive treat, often consumed with pear (avocado), is believed to have emerged in the late 19th century. However, the earliest identified reference was in a 1920 edition of The Gleaner, originally spelled ‘buller.’ It was also known as ‘cartman’s hymn-book.’ Click here for more, including a recipe.

This is usually called ‘Busta’ for short and is also known as ‘stagga back.’ It is a hard candy made of grated coconut and sugar, named after national hero and first prime minister, Sir Alexander Bustamante – which is said to represent his firmness of character. The candy is made by caramelising and adding grated coconut, which is then cooked until soft, mixed with ginger and other spices, flattened and left to cool. It is then cut into squares and wrapped in paper. Click here for a recipe.

According to Olive Senior’s Encyclopedia of Jamaican Heritage, coco bread was originally made by rolling out dumpling dough and baking it instead of frying. Once a staple of small country shops, served with butter or corned beef, it is now a commercial product most popular as an accompaniment for beef patties. The origin of the name is unknown, but Senior guesses that it might be related to the bread that used to be made at home in the mornings to be had with ‘cocoa tea.’

The name and recipe for dukunnu (also spelled duckanoo or duckunoo) was brought from West Africa. According to the NLJ, the word is Twi (a West African Akan language) in origin, with a derived meaning of boiled maize bread. This delicious dessert is made with cornmeal, or green banana, coconut, spices and brown sugar, all of which are tied up in a banana leaf (hence its other names, blue drawers and tie-a-leaf) and cooked in boiling water. Click here for a recipe.

This is a derivative of the word ‘escabeche,’ of Mediterranean origin, which describes a number of dishes marinated in an acidic mixture before serving, or the marinade itself. The item most often served in this style is fish, even though other meats such as chicken or pork and even vegtables can be ‘escovietched.’ In Jamaica, the fish is fried, then the marinade, made of vinegar, onions, cho-cho, carrots and scotch bonnet peppers is poured over it. Click here for a recipe.

This is a popular coconut tart made from a mixture of grated coconut and sugar is put in a pastry shell. It is also called ‘pinch-me-round’ because the pastry shell is pinched or crimped. It is believed to be of either Spanish or Portuguese origin. Click here for a recipe.

This is the name given by Jamaicans to fresh water crayfish or crawfish. It is found in many rivers across the island and is most often cooked in soups or boiled and seasoned as ‘pepper swims (shrimp)’. Click here for a recipe, courtesy of Jamaicans.com.

This is a popular soup most often served at nine-nights or other gatherings such as wedding. It is made from the offal of the ‘ram goat,’ along with its head, legs, liver and testicles (hence the name) and cooked with green bananas and other starches and seasonings. According to the Encyclopedia of Jamaican Heritage, it is said to have aphrodisiac powers and was traditionally served to bridegrooms at their weddings. Click here for a recipe.

According to the Encyclopedia of Jamaican Heritage, this is a thick sauce made of coconut milk boiled down with seasoning to the point where it begins to form a custard. Salt mackerel is usually added to the sauce. It is also known as ‘dip and fall back’ because the dish was served in a bowl placed in the middle of the dining table and persons would dip their starches into the bowl and ‘fall back,’ allowing someone else his/her turn. Click here for a recipe.