Your news in a nutshell! 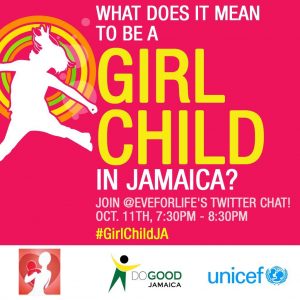 Today is celebrated as International Day of the Girl Child, under the theme, ‘Global Girls’ Progress = Goals Progress: A  Girl Data Movement’. For the social media savvy, expect plenty of posts hashtagged #DayoftheGirl and #IDG2016, and watch out for the Twitter chat on what it means to be a girl child in Jamaica, hosted by Eve for Life (@Eveforlife) starting at 7:30pm today. Also follow @digjamaica, and look out for our infographics, and the hashtag: #girlchildja.

2. Causwell sentenced to life in prison

Forty-year-old businessman Steven Causwell was given a life sentence for killing his former girlfriend Nadia Mitchell at her Oaklands Apartments home in 2008. The father of two will have to serve 20 years in prison before he may become eligible for parole.

Read more about the case on The Gleaner’s website.

A family member who was eyewitness to the murder of  five persons, including three children at 7 March Pen Road in Spanish Town, St Catherine, in the Africa Settlement area, shares his story with The Gleaner. He describes hearing screams when his relatives were tied up, shot and killed before their homes were torched.

A police constable and two teenagers are now hospitalised following an alleged shootout on the East-West leg of Highway 2000 Monday afternoon.

4. Former Armadale wards to get millions from Gov’t

Six former wards at the Armadale Juvenile Correctional Centre destroyed by fire in 2009 are to get millions of dollars following their victory over the Government in their bid to get compensation for breaches of their constitutional rights, Children’s Advocate Diahann Gordon Harrison has said.

Prime Minister Andrew Holness has announced that the National Identification System will be rolled out in January 2018. He says the system is expected to have a transformative effect on Jamaica, providing a comprehensive and secure structure to capture and store personal identity information for citizens and persons residing in the island.

The police have confirmed that two members of the Jamaica Constabulary Force were shot and injured on Spanish Town Road, in St. Andrew, this evening. This evening’s shooting follows an incident early this afternoon in which a policeman was shot and injured while performing traffic duty on the PJ Patterson Highway in St. Catherine. The CCU described the incident as a brazen attack.