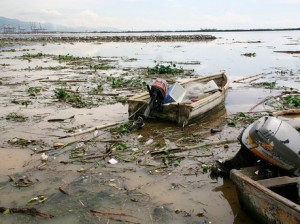 Local Government Minister Desmond McKenzie has announced that $20 million has so far been identified to help with clean up and recovery in Montego Bay, St James following Wednesday’s flood damage to sections of the western city. McKenzie says $10 million will be made available from the Equalisation Fund. See full story on The Gleaner’s website.

Professor Claude Packer, the first president of the Mico University College, has died. News reaching The Gleaner is that Packer died at 6:10 p.m. yesterday at his daughter’s home in Florida, United States. He had been ailing for some time. Packer served the education sector for more than 50 years before retiring in 2014. He became principal of Mico Teachers’ College in 1995 and was later appointed the first president when the teachers’ college transitioned into the Mico University College in 2009. See full story on The Gleaner’s website.

It was a night of terror in St James last night as another 12 people were shot, four fatally. The incidents began in Granville, where seven persons were wounded as gunmen went on a 30-minute shooting spree. Two of those wounded later died. See full story on The Gleaner’s website.

The Government has signed a US$15-million loan agreement with the Japan International Co-operation Agency (JICA) for the implementation of the Energy Management and Efficiency Programme (EMEP). Minister of Finance and the Public Service, Audley Shaw says that the sum is the second portion of a joint loan of US$30 million for the roll-out of the EMEP. See full story on The Gleaner’s website.

Six undocumented Jamaican migrants have been arrested in Bimini in The Bahamas. It’s reported that the authorities went to Cat Cay and held the six Jamaicans in bushes shortly after 10 o’clock, Wednesday morning. A Bahamian man was also arrested in connection with the matter. See full story on The Gleaner’s website.