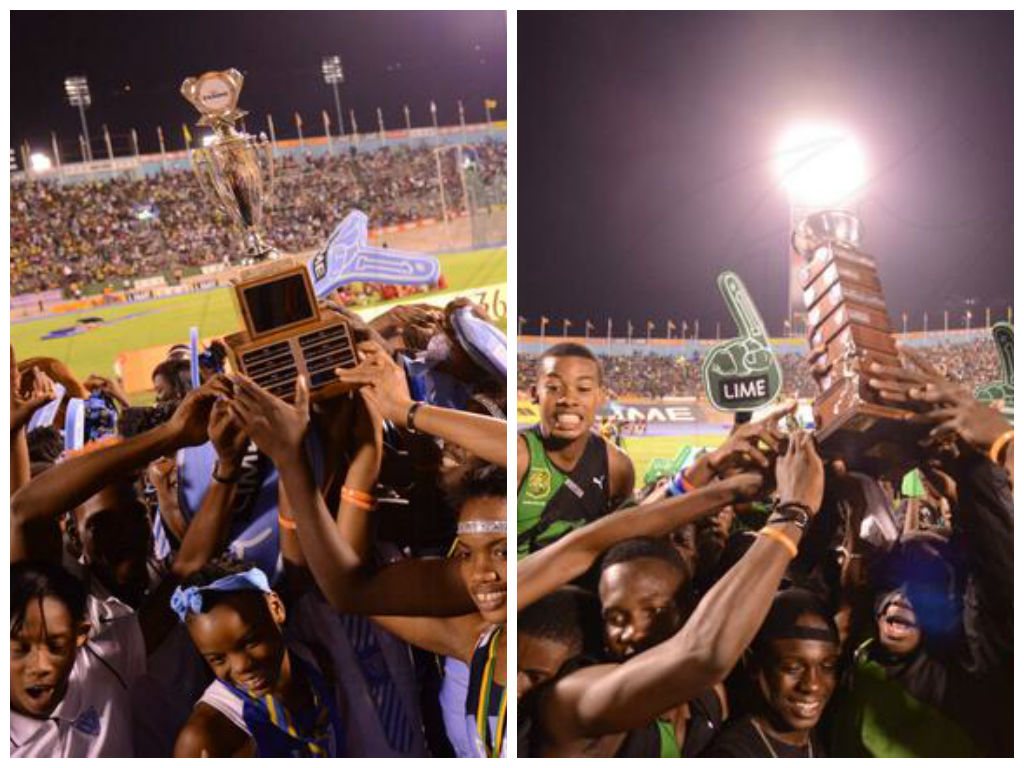 The 2014 staging of the ISSA/GraceKennedy Boys’ and Girls’ Championships ended on Saturday night with Calabar High School retaining its title from 2013 and Edwin Allen High School taking its second win. The excitement in the stadium and from fans on social media was high over the course of the five-day event, and the high school students certainly did not fail to entertain and enthrall the crowds at the National Stadium and the rest of the audience that watched on TV or via live stream or listened on the radio.

A total of 21 records were reset, seven fewer than the 30 at last year’s staging. However, this year manages to eclipse 2013 because of the quality of some of the records not only broken, but completely shattered. Everyone will remember that this was the year Yohan Blake lost three records (including the 4x100m Class 1 relay) and Usain Bolt lost the 400m record many people had believed would be around for at least a few more years.

To show just how spectacular these performances were, we’ve put them up against some international meet times and heights. You might be pleasantly surprised! (Please note: These comparisons are based solely on the times/heights recorded.) 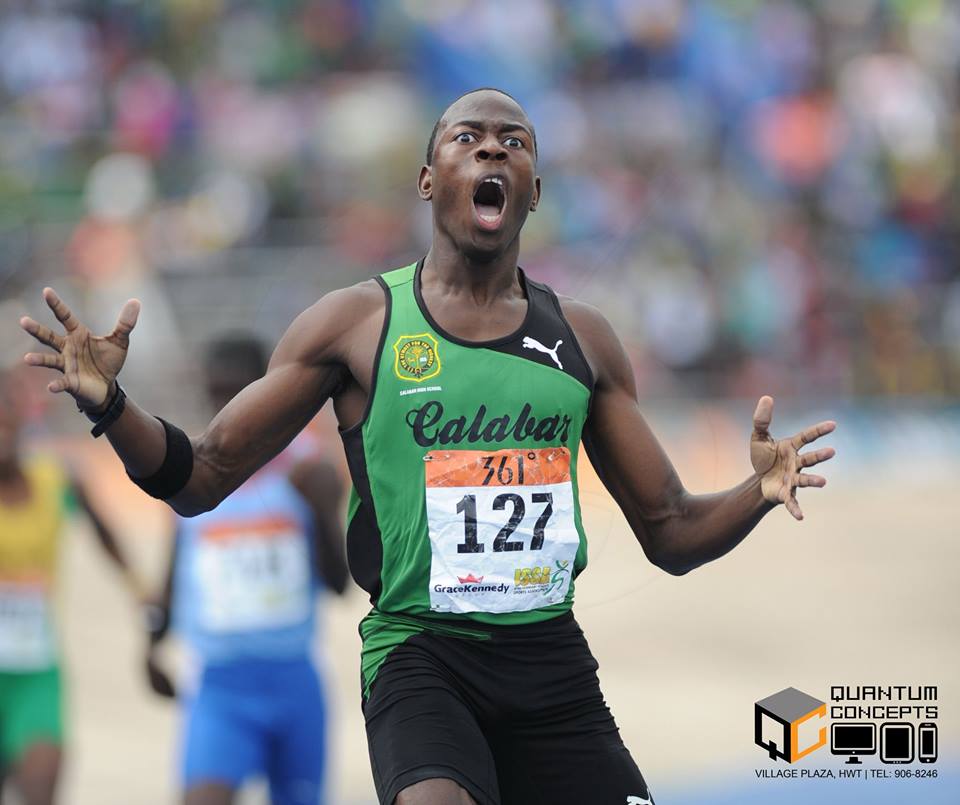 It’s basically crazy talk for anyone to even suggest the possibility of breaking a Usain Bolt record. However, since the start of the year, track pundits and fans alike predicted that at least one of his Champs records would not survive the five-day event – not with the way Zharnel Hughes and Jevaughn Minzie were running; also considering Javon Francis‘s glorious 44-second split in the 4x400m relay final to secure silver for Jamaica in Moscow last year. They were right. Hughes was unable to give it a go in the 200m as he was pulled from the event due to injury. Without the push from his rival, Minzie’s victory in 20.50 seconds was also well outside of Bolt’s time of 20.25 seconds. But Francis was ready. He stormed the National Stadium track in a full pelt display of speed and stamina to stun the crowd and stop the clock at 45 seconds even – .35 seconds faster than the time Bolt set in 2003. Everyone was full of praise for the 19-year-old nicknamed ‘Donkey Man’ for his stamina, but no doubt, the highest acknowledgement came from the big man himself, who immediately tweeted his congratulations to Francis.

To put Francis’ time into perspective, consider this: it is faster than any 400m time Bolt has ever recorded, even as a senior. Bolt’s personal best is 45.28 seconds. Francis’ time is also better than Kirani James’ 45.02 seconds record, set at the 2010 CARIFTA Games in Georgetown, Cayman, where the Grenadian broke Bolt’s mark of 46.35 seconds. Internationally, Francis would have placed second in the 2012 World Junior Championships (19 years and under) in Barcelona, Spain, behind Luguelín Santos of the Dominican Republic. This would be a dramatic improvement over his actual ninth place finish in 47.57 seconds. Francis would have won the event in the 2010 champs in Moncton, Canada, well ahead of Kirani James‘ 45.89 seconds. Interestingly, third in that race was Errol Nolan, who represented the US. He now represents Jamaica and featured on the 4x400m relay team that won the bronze medal at the recent World Indoor Championships in Sopot, Poland. 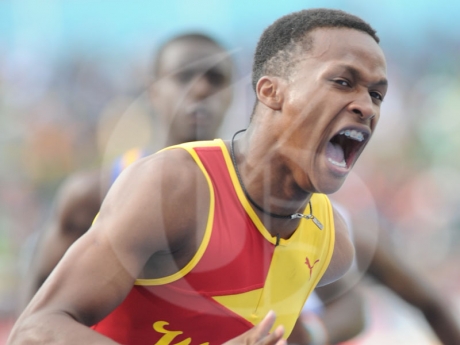 Jaheel Hyde‘s (Wolmer’s Boys) new championship and national junior record of 49.49 seconds in the Class 1 400m hurdles final would have placed him ‘donkey lengths’ ahead of the field at the 2012 World Junior Championships. The winner of that event, Eric Futch of the USA, clocked a then-world leading 50.24 seconds. Jamaica’s Javarn Gallimore (Jamaica College) placed fourth in 50.49 seconds. Hyde’s time also betters the CARIFTA Games record of 49.76 seconds set by Trinidad & Tobago’s Jehue Gordon in 20120 in Georgetown, Cayman.

However, the time would have placed Hyde third behind Gordon (49.30) and Takatoshi Abe of Japan (49.46) in the 2010 Moncton champs. Additionally, 10 years ago at the Grosseto games, Hyde, Gordon and Abe would have been a long distance behind the USA’s Kerron Clement, who clocked 48.51 seconds to win. Since then, Clement has gone on to win gold and silver medals at the senior World Championships and Olympic games. 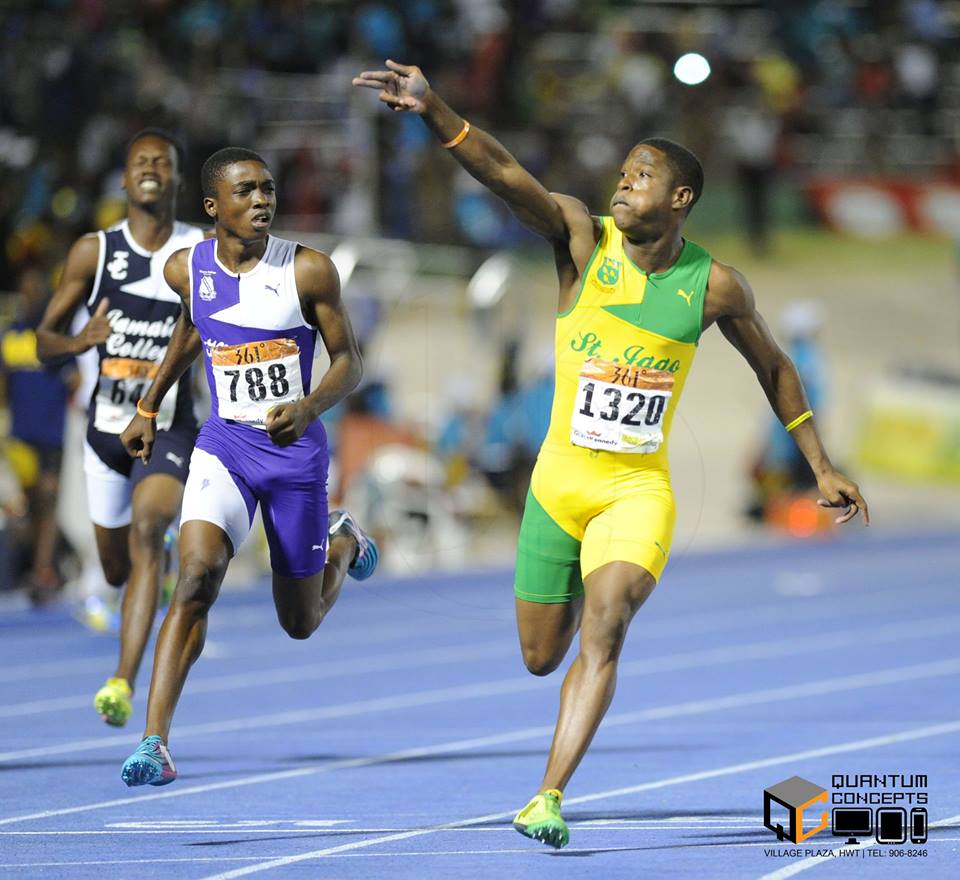 Raheem Chambers rewrote the Boys’ Champs and St Jago High School record books when he ran 10.29 seconds to shatter the Class 2 boy’s record of 10.34 set by Yohan Blake in 2006. This time would have seen him place first in last year’s World Youth Championships (17 and under) in Donetsk, Ukraine, ahead of China’s Youxue Mo (10.35). Jhevaughn Matherson of Kingston College, who placed second behind Chambers with a time of 10.37, would have had the same time as the third place finisher from Cuba, Reynier Mena at the Donetsk champs. This would have put him ahead of Calabar’s Michael O’Hara, who finished fourth.

Chambers’ time would have virtually annihilated the field in the 2011 World Youth Champs in Lille, France. There, Jamaica’s own O’Dail Todd of Green Island High School, won in a time of 10.51 seconds. Things wouldn’t have been much different at the Sherbrooke, Canada games 11 years ago, where Yahya Al-Gahes of the Kingdom of Saudi Arabia, clocked 10.69 seconds to win. 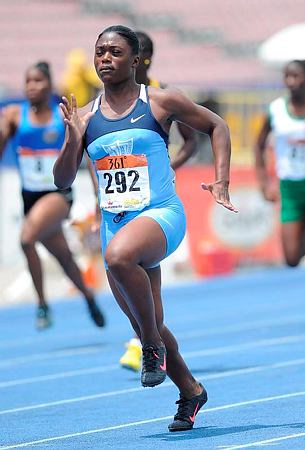 While she didn’t break the record, Edwin Allen High School standout Christania Williams ran the second fastest time ever at Girls’ Champs when she clocked 11.19 seconds – just .06 seconds off Veronica Campbell-Brown’s 2001 record of 11.13 seconds to take the Class 1 girl’s 100m. This time would have put her just ahead of Bahamian Anthonique Strachan in Barcelona in 2012. Strachan clocked 11.20 seconds to take the gold in a then-world leading time.

Williams’ time was also significantly faster that the 11.40 seconds recorded by 2010 World Junior champ Jodie Williams of Great Britain, but she would have been second at the Grosseto games, behind Ashley Owens of the US, who clocked 11.13 seconds to win. That race also featured a 16-year-old Sally Pearson, from Australia, who placed third. Schillonie Calvert, who recently featured in Jamaica’s stunning 4x100m relay win at the Moscow World Championships, was seventh in 11.60 seconds. 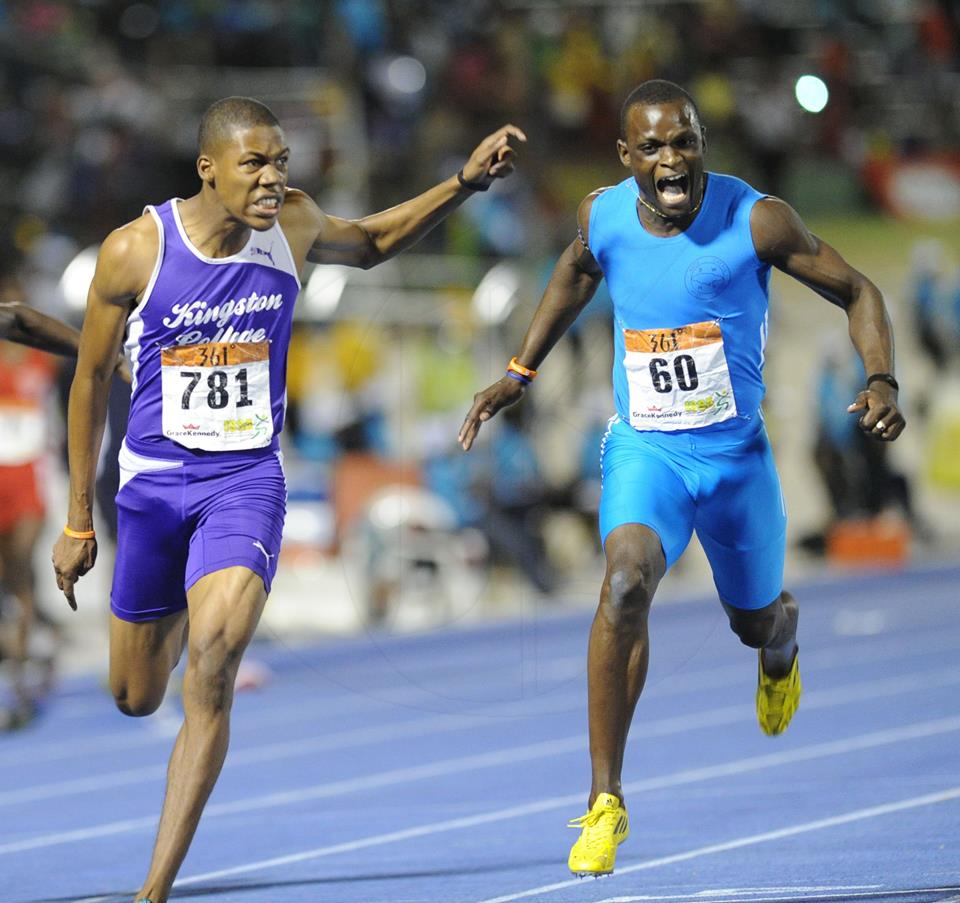 Less than 10 minutes after Chambers’ scintillating run, ‘The Beast’ saw another of his Champs records dismantled. This time, the man responsible was Kingston College’s Zharnel Hughes, who, coincidentally, trains with Blake at the Racers Track Club. Hughes erased the old time of 10.21 seconds, clocking 10.12 to win ahead of Bog Walk High School’s Jevaughn Minzie, who also broke the old record with 10.16 seconds.

These times would have placed both Hughes and Minzie behind Britian’s Adam Gemili in Barcelona, as the Brit set a then-championship record of 10.05 seconds to win. However, two years earlier, they would have outpaced Lee who ran 10.21 seconds in Moncton. Based on time, Hughes, Minzie and Lee would have all been ahead of the USA’s Ivory Williams, who clocked 10.29 seconds at the 2004 Grosseto games. Jamaica’s Romeldo Rose placed third in that race in 10.34 seconds. 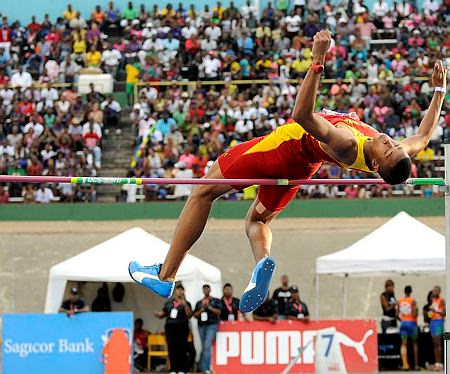 Coming off the track for a while, Christoff Bryan continued to show his class in the high jump, representing Jamaica’s best hope for senior medals in this discipline since fellow Wolmerian Germaine Mason’s win at the 2003 Pan American Games in Santo Domingo, Dominican Republic. Bryan won by clearing 2.20m and later improved his mark to 2.23m, but failed to clear 2.26m.

Bryan had placed third at the 2013 Donetsk games with a height of 2.16m, but his current record would have placed him atop the podium ahead of South Korea’s Sanghyeok Woo, who scaled 2.20m. Two years prior in Lille, Bryan would have also bettered Gaël Levécque‘s 2.13m. Eleven years ago in Sherbrooke, he would have been .12m better than Germany’s Martin Günther (2.11m). However, the height would have placed him third in the World Junior games in Moncton and fourth in Barcelona.