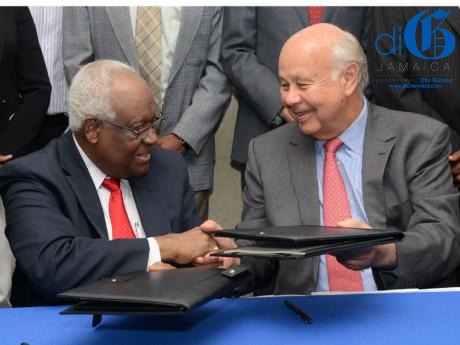 On August 5, it was announced that media powerhouses The Gleaner Company Limited and Radio Jamaica Limited have agreed to combine their media operations. This is an important development in Jamaican media history, as these companies represent cornerstones of the nation’s news landscape. diGJamaica wants to keep you informed on the proceedings of this deal, starting with 5 critical facts about the merger.

1) Is this a merger or an acquisition?

This is in effect a merger of the strength of two Jamaican owned companies to create a stronger, more sustainable media entity, better equipped to serve the Jamaican people at home and abroad.

The transaction will be achieved through an acquisition of the media subsidiary of The Gleaner Company Ltd. by Radio Jamaica Limited. After the transaction, the acquired media operations will be consolidated with those of Radio Jamaica Limited and marketed under a new group name reflective of the rich legacies of both operations. Shareholders of The Gleaner Co Ltd. will hold 50% of the consolidated entity. Existing shareholders in RJR will hold the remaining 50%.

The combined company will be owned by nearly 10,000 shareholders with no one exceeding 10% as per the existing articles of the company. This minimises chances of undue influence from any one or few owners on the management.

2) Why are the companies merging?

The current global and local economic environments make the coming together necessary as both companies operating separately would have had to invest considerably in building out platforms and services in order to become full service multimedia entities. The combination allows for better capital management which ultimately benefits customers and shareholders.

This combining of resources, products and services allows the companies to accelerate digital transitioning through leveraging of a larger resource base, combining unique expertise from each other’s core businesses, accessing each other’s rich content and archives while developing new and exciting content as they keep pace with industry innovations and new competitors.

3) Who will be in charge of the new/merged entity?

The expanded entity will be led by J. A. Lester Spaulding CD as Chairman, with Oliver F. Clarke OJ as Deputy Chairman. There will be an initial fourteen member board represented equally by seven directors from each of the existing companies. Gary Allen is to be CEO while Christopher Barnes will serve as COO.

The management structure will be set up to best cover the operational lines of the business as well as their associated administrative support needs. The CEO and COO will be responsible for selecting and implementing the most appropriate structures which will be announced in due course.

4) If you are a shareholder…

RJR will do a combination of a share split and issues of new shares to increase the company’s issued shares to 2.4 billion. 1.2 billion of these shares will be given to Gleaner shareholders as the payment for the Gleaner Company (Media) Limited subsidiary.

So, RJR shareholders will hold more RJR shares than they did before, however the aggregate value of the shares will remain the same subject to market changes after the split.  Both sets of shareholders will now have equal stake in the combined company.

5) When is transaction expected to close?

This complex transaction will require both shareholder and court approval as well as support from regulators (e.g. Jamaica Stock Exchange and Broadcast Commission). The deal could take between 4 and 6 months to close.

For more information on the merger of The Gleaner and RJR, read the RJR Gleaner Merger Q&A.